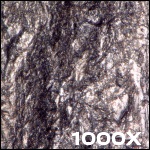 Isotropic Superfinishing (ISF) is a process used in aerospace and high performance racing applications to reduce friction and improve wear resistance, durability, and corrosion resistance in gears. While a freshly cut and lapped gear may appear plenty smooth to the naked eye, a look through a microscope reveals a surprisingly rough surface (as can be seen in the photo to the right taken at 1000x magnification).

For non-high-performance applications, these imperfections in the gear tooth surface are small enough to allow heavy gear oil to lubricate the gears for acceptable performance. Using such gears in racing and performance applications, however, would be highly undesirable because friction between the gear surfaces as well as the required heavier gear oil reduce power transfer to the tires.

Unlike polishing or finish grinding to create a smoother surface, isotropic finishing is a non-abrasive, chemical-mechanical process that removes surface peaks without affecting the surface valleys, so that the gear geometry remains unchanged and none of the case hardened surface is worn away.

Crown Race Gears has partnered with REM Surface Engineering, the industry leaders in Isotropic Superfinishing, to perform and oversee the ISF process on all of our gears. The entire process, from the equipment to the chemicals and the selection of the non-abrasive media was calculated by REM Surface Engineering to maximize the surface finish of our ring and pinion gears.

The REM ISF process has two stages. The first stage is a chemical treatment to apply a soft, one-micron-thin film to the entire surface of the gear. The gear is then placed in a large vibration bowl filled with specific non-abrasive media that begins to physically remove the film from the tallest peaks. Over time, the peaks are removed, and the valleys remain untouched, leaving a significantly smoother surface.

The second step in the process is called burnishing where a mild alkaline mixture is introduced into the vibratory bowl to create a polished, chrome-like finish on the gears. This step also removes all traces of the protective film and leaves the gears clean and ready for immediate use.

As a proof of concept, Crown Race Gears sent one of their GM 10.5" ring and pinion gear to an aerospace laboratory for surface finish analysis before and after the REM ISF treatment and these were the results:

The analysis concluded that the REM ISF process improved the surface finish to the point that friction on the gear set was reduced by 25% on the pinion and 37% on the ring gear. 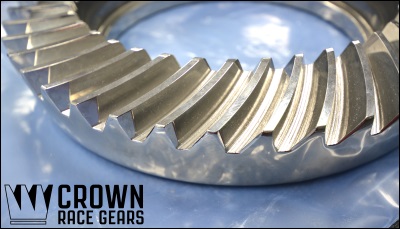 Isotropic Superfinishing is the final process performed on Crown Race Gears before they move on to an optional Magnaflux check prior to the final quality control assesment where they are inspected and assigned a serial number.