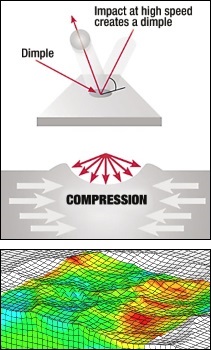 After heat treatment, some residual surface tensions remain in the gear that could eventually grow and lead to gear failure. Removing these stresses with normalizing would not be an effective process at this stage because that would reverse the benefits of case hardening and, therefore, a mechanical process known as shot peening must be used instead.

As most gear failures can be traced to a single micro-crack forming at the surface, delaying the formation of these cracks and preventing their propagation will increase the usable life of a gear by 75% or more. Shot peening achieves this by bombarding the surface of the gear with thousands of small ball bearings called shot. As the indentations from the impacts begin to overlap and compress the surface, they trap imperfections and bury tension points where fatigue cracks could begin.

Shot peening works a lot like stepping on snow to pack it down. The fallen snow begins as an imperfect mound and as you continue to step on it, the surface becomes hard-packed and smooth.

The compressive forces of shot peening also provide a balance to the residual internal tensile stresses leftover from heat treatment and have been proven to transform some residual austenite to martensite continuing the case hardening process. 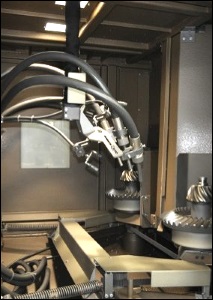 After the ring and pinion gears are finished with heat treatment, they move on to a primary shot peening process. Each ring gear and pinion gear is carefully positioned in a computer controlled shot peening cabinet where the surfaces of each gear are precisely exposed to the incoming shot blast. When the process starts, the gears move into the shot path and slowly rotate through the duration of the procedure to ensure complete surface coverage.

The focus of the primary shot peening run is to relieve all surface tensions and cover the complete surface of each gear with microscopic indentations. This process creates a layer of compressive stresses (the good kind of stress) that eliminate unwanted surface tensions while also effectively breaking up and burying any stress risers, micro fractures, and inclusions (imperfections) in the material. This constant bombardment of the gear case will also improve the martensitic conversion to further increases surface hardness.

In the past, shot peening was seen as a relatively simple process because not much was known about the effects of shot size, material, speed, angle, and duration. Today, shot peening is a science of its own and engineers use complex calculations and perform numerous test runs to create the perfect shot peening program.

After the first shot peening treatment, Crown Race Gears move on to lapping and then cryogenic treatment before coming back for a secondary shot peening program.

As gears turn and the teeth on the pinion gear push and slide against the teeth of the ring gear, significant bending forces are applied to the base of each tooth. During a professional desert race, vehicles will reach speeds over 100 mph which equates to these forces being applied to each ring gear tooth over 900 times per minute. Ultra4 racers, rock bouncers, and mud trucks regularly encounter shock loads that transfer the equivalent of 4 to 5 times the vehicle's weight onto a single gear tooth. To ensure Crown Race Gears can withstand both extremes, a secondary shot peening process is directed at the root areas of each gear.

By focusing the secondary shot peening process directly at the gear root transition radius, where the highest stresses occur, Crown Race Gears is able to maximize the durability and fatigue resistance of each gear to handle the toughest and most abusive racing conditions.

Although it might be expected that the shot peening process would leave the surface of the gears covered with small dents, when performed correctly with 100% coverage, the surface is left surprisingly smooth and consistent. To further improve the surface finish for reduced friction and wear, the gears will ultimately go through a final REM ISF finishing process where the surface is brought to an aerospace grade finish.